Sociolinguists working in urban multilingual contexts in Senegal (and elsewhere) observe that in the many ethnically mixed marriages occurring in cities, the language of one parent – in Senegal very often that of the mother – often loses out and is not used in the home (e.g., Dreyfus & Juillard 2005). Many diaspora organisations and outsiders, including linguists, tacitly or explicitly contrast this situation with rural settings, where, according to public perception, there is one community language that is “still” transmitted to children. (The scare quotes around the “still” are there to alert to the problematic status of the widely shared view that any other language used in these configurations doesn’t really belong there and threatens the community language. Since there are no monolingual settings in Senegal, small community languages can only be seen as under threat according to this line of thought.)

I just finished reading Marc Schloss’ ethnography of the Ehing (Schloss 1988), a group living not far from the Crossroads research area. As always when reading anthropologists’ accounts of social life in Casamance, I’m struck by the dissonance between their descriptions of movement, and in particular the movement of women, resulting in diversity being woven into the fabric of society, and the constructions of homogeneous communities that are so pervasive in the public opinion and in the ideologies of community members themselves – here is an extract from the statutes of the Baïnounk lobby organisation BOREPAB to serve as an example.

In reality, the vast majority of marriages, in rural and urban settings, is “mixed”. The social organisation of many groups in Casamance and beyond relies on the movement of women into their husbands’ homes. The smaller the group, the more likely it becomes that this movement will bring in women from outside the language area, as I described in my recent post on the Kassanga. But hold on – what is the language area in that case, given that the idea of a zone dominated by one language must become obsolete once the presence of women speaking other languages is acknowledged?

Language areas are, in those villages where descendance and settlement are determined by patrilineal and virilocal patterns, construed as homogenous places based on male identity, a process that I describe in Lüpke forthcoming a and b). A patrimonial language – the language associated with a place – is the language of the male descendants of its remembered founding lineage. Women often can, and in some cases even must, come from areas associated with other patrimonial languages. Their linguistic identity is erased from the outwardly projected linguistic identity of the place, but of course they don’t fall silent. Since cross-cousin marriages are en vogue throughout the region, they can be the carriers of longstanding societal bilingualism, the daughters marrying into the villages their mothers left when they became somebody’s wife. But women can come from all over Casamance and beyond. Even if they speak the patrimonial language of their new home in many interactions, which is not always the case, the other languages in their repertoires leave traces in their language use and shape grammar and lexicon of the patrimonial language . Their children will assume the ethnolinguistic identity of their fathers and, if they grow up in the village, and not in entirely different linguistic environments, at face value do justice to the image of the community language speaker. But in daily life, they will pick up what is present in actual language use in their environment rather than only the proclaimed community language.

In Kanraxël, a documentary on the multilingual life of Agnack, which we fittingly screen on women’s day at SOAS, women’s identities and language practices in the rural setting of Agnack play a central role. The producer, Anna Sowa of Chouette Films,  in an interview to appear in Cinéwomen, stresses her delight at having  “the opportunity to portray women in Agnack in such a prominent way. Normally women in the village are next to invisible. Our film has showed that they have a significant role in village’s society and identity.”

Working with women, investigating female language use and, more broadly, linguistic practices of both men and women as gendered, rather than taking male speech and male-centred language ideologies as the benchmark, is still far from being the norm in descriptive and documentary linguistics. Since women are erased from the dominant patrimonially motivated identity discourses, and since their language use doesn’t fit the corresponding ideology, they are often omitted from documentation and lobbying efforts based on what Tony Woodbury calls the “ancestral code mode” of language research (Woodbury 2005). Many descriptive grammars are based – even if only for pragmatic reasons of access and availability – exclusively on the language practice of one or a handful of male speakers. Even recent works on language documentation in Africa recommend to start by focussing on and working with male speakers (Austin & McGill 2012), unless the research has strong sociolinguistic interests.

Our ongoing research proves daily that it’s necessary to change tack – not just for the sake of equality and representativeness, which may seem as desirable but too lofty goals to many fieldworkers with limited time and resources. To their concerns, we can reply that including women is crucial in order to collect data that are not skewed due to the limited insight into linguistic behaviour they allow. In the case of West Africa, women’s pervasive mobility, as evident from  DNA analyses (Barbieri, Whitten, Beyer, Schreiber, Li & Pakendorf 2012) has tremendous repercussion on linguistic ecologies, language socialisation of children, longstanding patterns of multilingualism and concomitant lexico-grammatical contact phenomena. Many of the widespread areal convergence patterns can’t be explained based on grammars featuring exclusively male language use and on ethnolinguistic groupings  based on male-centred ideologies only. Only a close observation of mobility and language use of all community members allows for the development of plausible language contact scenarios.

Women, who are crucially involved in the language socialisation of children, are not optional – they are a central key to uncover more complete and intrinsically diverse communication patterns in any society, and it’s  more than time to make them visible. Once we as researchers open our eyes to this incontournable fact, every context becomes mixed, not just in urban constellations and as an outcome of migration and globalisation, but because of motivations predating modernity by long. 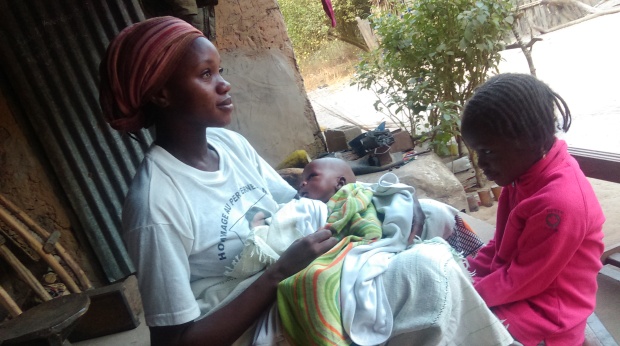